Thunderbird Park was established in 1941 when a display of totem poles from the provincial museum’s collection was set up at the corner of Belleville and Douglas streets in Victoria. In 1952, Anthropology Curator Wilson Duff initiated a pole restoration program and hired Kwakwaka‘wakw master carver Mungo Martin as chief carver for Thunderbird Park.

Over a number of years, the original poles were moved to inside storage and replaced by replica versions carved by Martin and others working under his direction, including Henry Hunt and Hunt’s sons, Tony and Richard. After Martin’s death in 1962, Henry Hunt became chief carver, followed by Richard Hunt and the Nuu-chah-nulth artist, Tim Paul.

All of the poles now in Thunderbird Park were carved in the Carving Studio building there. All are versions of the originals with the exception of the heraldic pole in front of Wawadiťła and the more recent honouring pole by Sean Whonnock and Johnathan Hunt. Learn more about Thunderbird Park and its history here. 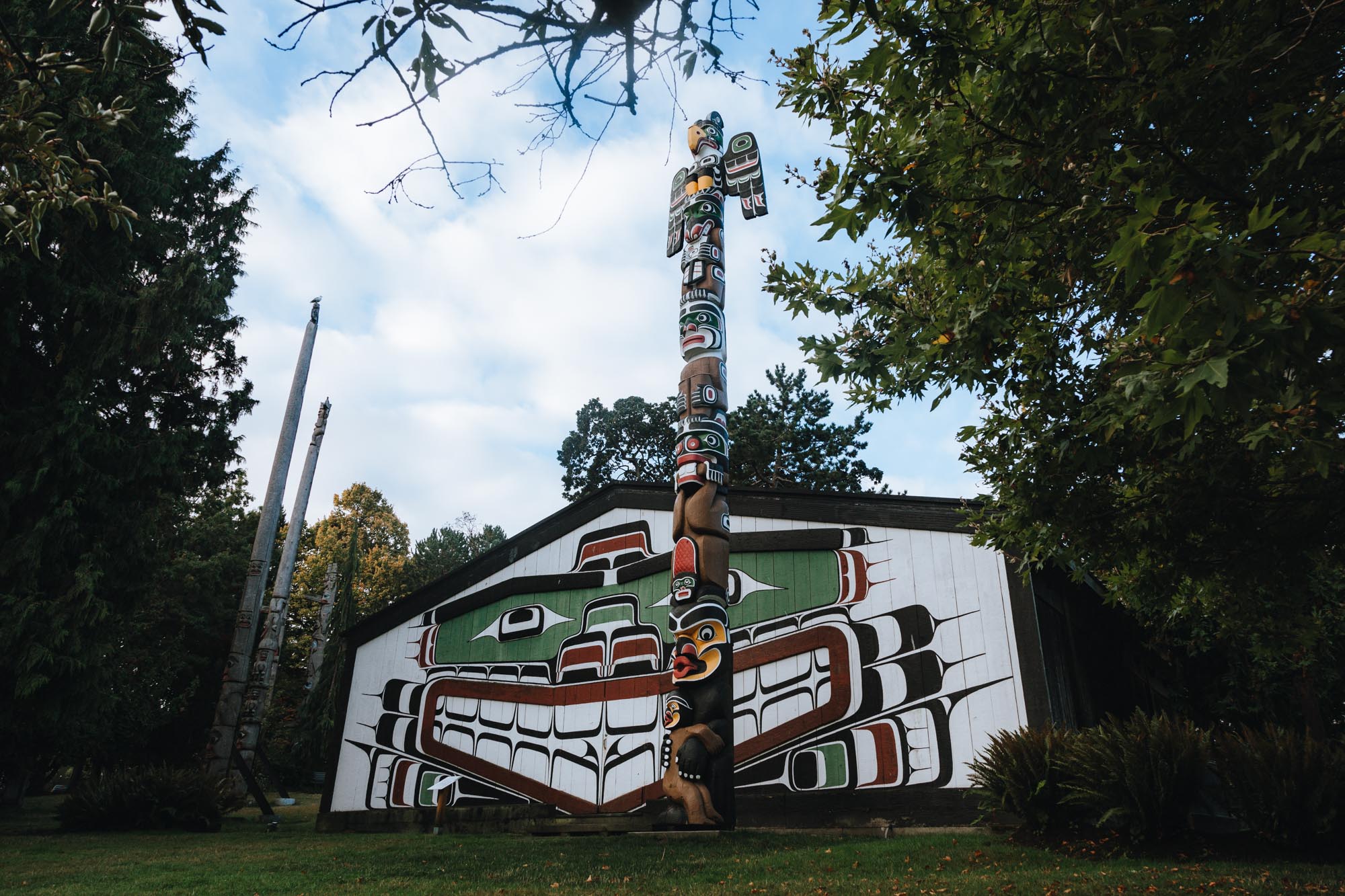 When it was constructed in 1941, Thunderbird Park featured a Northwest Coast-style house with an inaccurate frontal painting produced especially for the building, as well as original carvings from many different First Nations, all put together in an inauthentic way. Chief Nakaṕankam (Mungo Martin), a Kwagu’ł artist from Tsaxis (Fort Rupert) who was considered the finest Kwakwaka’wakw carver of his day, made this new house in the park. Wilson Duff, the museum’s Anthropology Curator at the time, stressed that this house, unlike the previous one, was culturally appropriate and accurately portrayed First Nations traditions. Moreover, these were not dead traditions consigned to the past, but still active features of First Nations culture in British Columbia. “This house is more than just an authentic Kwakiutl house,” wrote Duff when the new house opened in 1953. “It is Mungo Martin’s house and bears on its house-posts hereditary crests of his family.”

The traditional hereditary rights to Wawadiťła are now the property of Martin’s grandson, Chief Oasťakalagalis ´Walas ´Namugwis (Peter Knox of Fort Rupert). On the occasion of the 50th anniversary of Wawadiťła in 2003, another great feast took place in the house, hosted over two evenings by Chief Peter Knox and the Royal BC Museum. Like the opening feast, this was attended by many First Nations and non-First Nations dignitaries. A poster celebrating the occasion was created by ‘Maxwa’yalisdzi (David Knox), Martin’s great-grandson. It featured a design based on the Copper Max’inuxwdzi (Great Killer Whale) that belonged to Martin and which he presented to the Royal BC Museum in 1960.