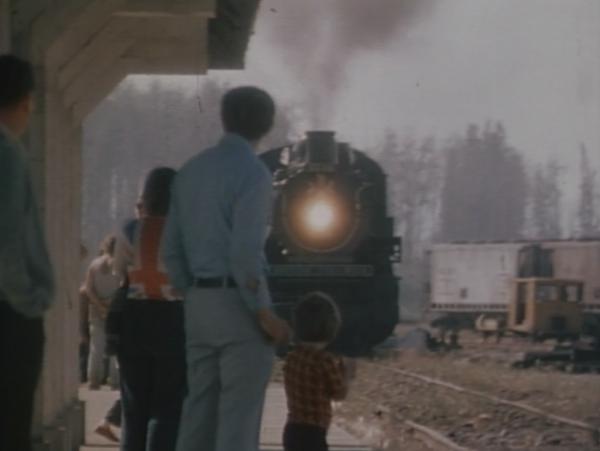 British Columbia developed as it has largely because of the age of steam, which began in the 1830s with the steamship <em>Beaver</em>. When the railways arrived in the 1880s, they carried inland passengers and freight further and faster than ever before, powered by steam locomotives. What better way to show British Columbians the story of the province’s “Age of Steam” than by a rail-based travelling exhibition? This 1976 colour film, <em>Museum Train: The Great Steam Exhibition of the 1970s</em>, showcases a provincial government travelling exhibition developed by the BC Department of Recreation and Conservation.

BC Provincial Museum staff created the exhibition using a restored steam locomotive and three coaches, repainted in the familiar Tuscan Red of the Canadian Pacific Railway. Over the course of nearly a year, staff researched, planned and installed the exhibits in Victoria, working at the city’s Esquimalt and Nanaimo Railway (E&N) roundhouse. The train had a theatre, which showed specially produced films, and a gift shop staffed by volunteers from towns along the route.

The Museum Train opened July 1, 1975, in Vancouver’s Central Park, and over the next few years it toured most of the province accessible by rail, the familiar toot of its whistle echoing once more in BC’s forests, farmland and valleys. But by 1979, mounting repair bills for the aged steam locomotive and rail cars forced an end to the popular exhibition.

Good stock footage of the Museum Train being developed and underway is held in the moving images area of BC Archives, CHEK TV fonds.