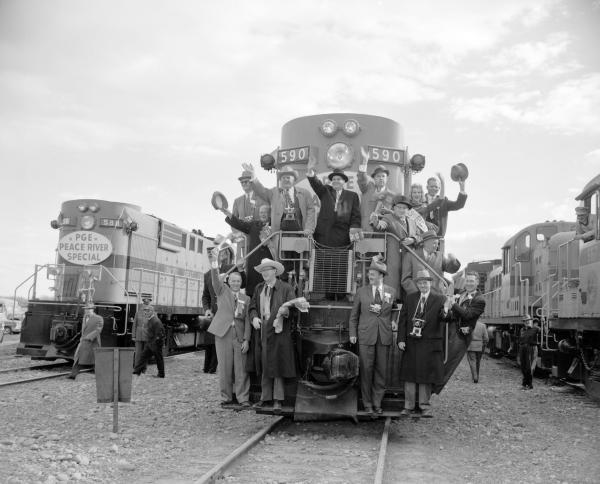 This photograph shows the enthusiastic launch of the inaugural journey of the Pacific Great Eastern (PGE) Railway “Peace River Special”. The PGE was British Columbia’s largest railway and Canada’s third largest, incorporated in 1912. A class II regional railway, it eventually operated 1,441 miles (2,319 km) of mainline track. BC Archives I-68596 shows Premier W.A.C. Bennett holding the last spike, while in I-68586, he is seen speaking to “Miss PGE”.

In the early days of the 20th century, the only link to BC’s vast interior was the Cariboo Wagon Road, which had seen better days and only went as far as Barkerville. The PGE’s founders hoped to open up the interior of the province by building and operating a railway to provide inexpensive north/south transportation for freight, passengers and mail. The line grew in painfully slow stages, its development hampered by difficult terrain, the Great Depression and two world wars, as well as ongoing financial problems. The delays resulted in nicknames such as “Province’s Great Expense”, “Prince George Eventually" and “Past God’s Endurance”.

As the line inched northward, it created the town of Williams Lake, which became the prime cattle shipping centre for the province. And in 1952, the Prince George line finally opened. Six years later, the line had stretched to Fort St. John and Dawson Creek, in BC’s northern Peace River district.

Starting in 1918, PGE was owned by the provincial government. It became British Columbia Railway in 1972 and BC Rail in 1984.