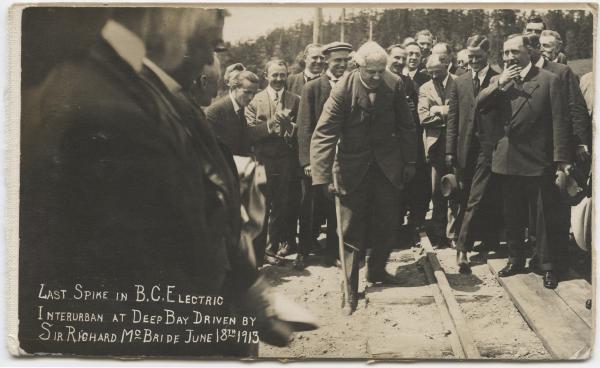 This photograph taken June 8, 1913, shows Sir Richard McBride driving the symbolic last spike in a ceremony to mark the opening of a new rail route on southern Vancouver Island. It ran between Victoria and Deep Bay (now Deep Cove) at the northern end of the Saanich Peninsula. Premier McBride spoke of the beautiful scenery along the route, pronouncing that “every foot showed new wonders,” and suggesting that the new rail service would bring vast development to the rural peninsula. This route, 23 miles (37 km) long, was the eighth interurban line developed by the BC Electric Company.

The company was formed in 1897 through the amalgamation of several electric street railways and electric power facilities in Vancouver, Victoria and New Westminster. During 1913, BC Electric’s street cars and interurbans carried nearly 70,000 riders, and its locomotives hauled 448,750 tons (455,951 tonnes) of freight. It continued operating until 1962.

The BC Electric Victoria-to-Deep-Bay line was one of three railways running north/south on the peninsula. Victory and Sidney Railway (V&S) ran up the middle, linking farmers to their markets. A third line, Canadian Northern Pacific Railway, operated from 1917 to 1935. The V&S stopped running in April 1919, the Interurban closed in October 1924, and traffic on the Canadian Northern line, by then owned by Canadian National, ended in 1935.

Also see BC Archives C-07473, “Arrival Of The First Interurban Train To Deep Bay” and I-67666, “Front view of Brentwood Hotel, on the Saanich Interurban Railway, ten miles [16 km] from Victoria, BC”.