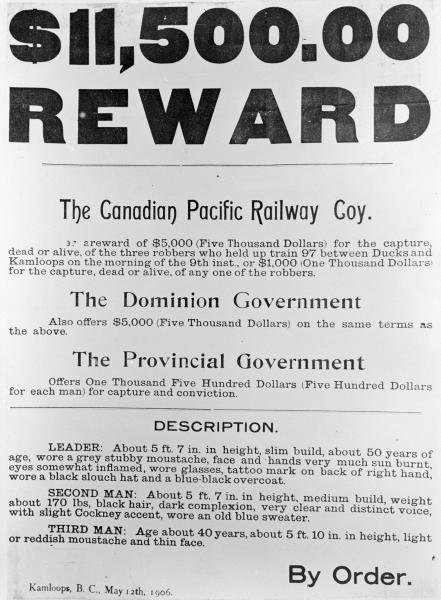 The first train robbery in Canadian history was in September 1904, on an isolated piece of track near Mission, BC. It was masterminded by notorious American outlaw Bill Miner, known as “the gentleman bandit” for his polite way of speaking to his victims. Miner and two accomplices escaped with $6,000 in Cariboo gold dust, $1,000 in cash, registered mail and at least $50,000 in unregistered bonds.

Miner then went to ground, living at Princeton for two years under the name of George Edwards. On May 8, 1906, he struck again just east of Kamloops, but this time he was not so lucky. Searching the baggage car, he overlooked several bundles of bank notes, and got away with only $15 in cash and a handful of liver pills.

A poster announced a reward of $11,500 for the bandits, dead or alive, the money offered by the Canadian Pacific Railway and the federal and provincial governments. Before it was even posted, the Royal North-West Mounted Police had arrested Miner and his two accomplices. Item A-01617 in the BC Archives collection is a photograph of Miner, alias George Edwards, taken in Kamloops when he was captured; B-03244 shows Miner arriving at the Kamloops jail

On June 1, 1906, William A. Miner was sentenced to life in prison at the New Westminster penitentiary, but in August 1907 he escaped and fled to the US, where he continued his infamous career. He died in 1913 at the Georgia State Prison Farm Hospital.