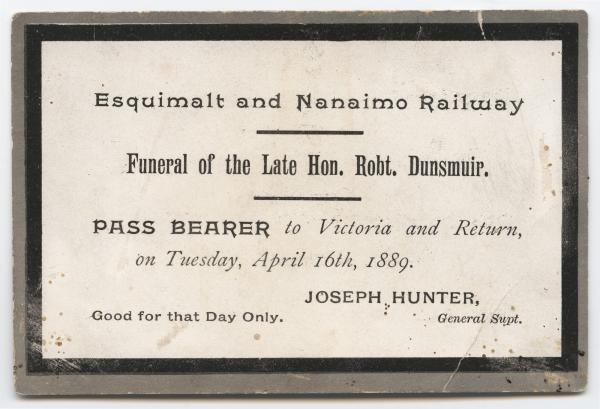 When he died on April 12, 1889, Robert Dunsmuir was given a large public funeral, with thousands watching the funeral procession. This day pass, issued by E&N company superintendent Joseph Hunter, allowed the bearer to ride from Nanaimo to Victoria and back to attend the funeral.

A north-south rail corridor on Vancouver Island had been part of the Canadian government’s promise to lure the Colony of British Columbia into Confederation. The route would provide a much-needed rail link between Victoria and the thriving coal industry around Nanaimo. At the centre of both the industry and the railway was Scottish-born Robert Dunsmuir, a wealthy colliery owner and provincial politician based in Nanaimo.

The Esquimalt and Nanaimo (E&N) Railway company was formed in December 1883, when the province transferred Crown lands to the federal government. Dunsmuir won the contract to build the railway, and began at Esquimalt on February 26, 1884. Its completion in the summer of 1886 helped further expand Dunsmuir’s empire.

In 1905, the Canadian Pacific Railway (CPR) purchased the E&N from Dunsmuir’s son and heir – James, a former premier of the province. The million-dollar price tag was just for the railway; lands sold or leased by the Dunsmuirs were to be acquired separately. CPR extended the E&N northward to Comox and westward to Port Alberni, creating a total of more than 124 miles (200 km) of rail on Vancouver Island. The company later changed hands. Long-deferred maintenance caused issues with the tracks, and trains stopped running on the corridor in 2011.