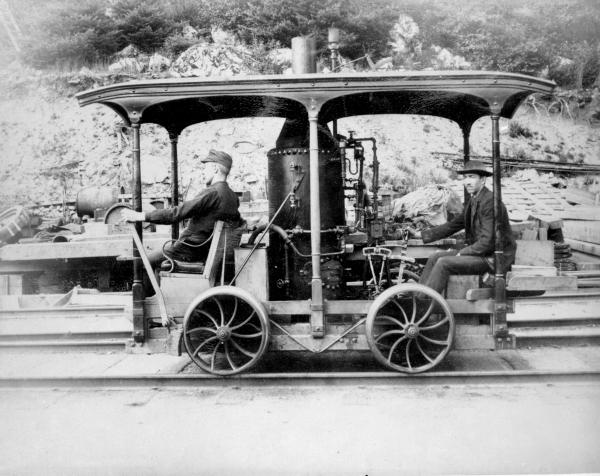 “A transcontinental railway within 10 years.” This promise by Prime Minister Sir John A. Macdonald helped persuade the Colony of British Columbia to join the Canadian Confederation in 1871.

The Pacific Section of the Canadian Pacific Railway would traverse some extremely rugged and dangerous terrain, from deep river canyons to high mountain passes. In 1880, New York engineer Andrew Onderdonk was given the contract to build the section from Port Moody to Eagle Pass, near Revelstoke, BC. This photograph shows workers inspecting newly laid line.

Onderdonk imported thousands of Chinese workers to meet the project’s immense labour needs. In all, an estimated 15,000 came to BC, where they played a crucial role in building the railway, especially the difficult western sections. They faced discrimination, danger, low pay and harsh conditions. At least 600 died as the result of accidents, exposure, illness and malnutrition. In May 2014, the BC government formally apologized to Chinese Canadians for this and other historical wrongs.

On November 7, 1885, the eastern and western sections of the railway met at Craigellachie, where the symbolic last spike was driven, and the next year on July 4, the first passenger train arrived in Port Moody from Montreal. Thus, the prime minister’s promise was fulfilled, bringing the young country’s westernmost province new opportunities for settlement, trade and communication.

This photograph is part of BC Archives PR-1803 Andrew J. Onderdonk fonds, which houses 328 photographs of the construction of the Canadian Pacific Railway, Pacific Section.