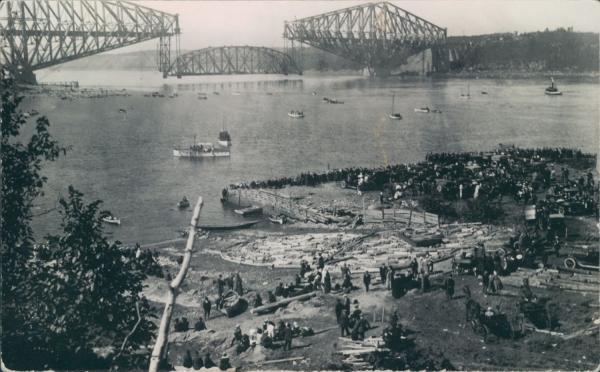 Distant view taken from the shore during the connection manoeuvres of the central span. By the number of people on the edges of the shore, the extent to which this event was eagerly awaited is evident, particularly after the two collapses of 1907 and 1916. For a long time, this bridge was the only link between the south shore and the north shore in Quebec City, until the construction of the Pierre-Laporte Bridge in 1970.

“The ferry and the use of the ice bridge in the winter could no longer meet the increasing demand for the transportation of passengers and merchandise between the two cities [Quebec and Levis]. The authorities decided to build a bridge connecting the two shores. This bridge could accommodate trains, streetcars and cars. The site was chosen in 1887, and work began in the month of October 1900 with the installation of the first stone of one of the pillars by the Prime Minister of Canada, Sir Wilfrid Laurier.”